After graduation from Winston-Salem State University with a concentration in communications, Terry parlayed his videography and photography skills into a successful career working for BET Networks and VH1. The 8-year stint took him to far-flung locales such as Los Angeles, Washington, D.C., New York and Atlanta, where he worked on projects with various luminaries in the entertainment industry. The experience taught Terry to improvise and adapt to changing working conditions day in and day out.

Adding to his videography, event planning, writing and professional modeling, the polymath continually strives to expand and improve his footprint and more important,  nurture those with similar creative aspirations.

Recalling the period from his own life as “an outsider looking in,” when his dreams were merely an idea, Terry is determined to connect others with industry professionals so that they may realize their own dreams. He feels Winston-Salem, with its rich artistic and cultural tradition, and Creative Center of NC, specifically, are the perfect vehicles to do just that, and ensure his legacy among future generations who will be able to recall — as they do of his great-grandfather:  “He helped so many people and made sure we were taken care of.”

Creative Center’s youngest trustee, 26-year-old Pierce Henderson, grew up in Winston-Salem and his work explores education policy and entrepreneurship. As a current graduate student at Harvard, he is exploring the intersections between education and technology implementation at the Graduate School of Education.

Currently, he is a fellow at the Harvard Ministerial Leadership Program, where he serves as a policy consultant and the point of contact on a student team working with the Ministry of Higher Education in Zambia on their technology strategy in response to COVID-19. His group aims to identify areas of opportunity for the Zambian government to expand digital access for their tertiary students. Additionally, he is working with another team to craft policy recommendations for Empresarios por la Educación and the Ministry of Education in Guatemala in teacher’s professional development.

Outside the policy space, Pierce is serving as the creative lead for Harvard’s Innovation Design Club and is a member in the cross-Harvard group, Future of Work, convened by Harvard’s Kennedy, Business, and Education schools — synthesizing his background in design with entrepreneurial application. Most recently, he and teammates from Harvard, Wharton, and MIT Sloan competed in MIT’s hackathon, Hack4theFuture, finishing first in the AI and Future of Work track.

For his contribution as board member of Creative Center of North Carolina, he is working with a talented team to develop the brand and identity for the organization. And, for his contribution to the city that raised him, Pierce is attempting to find ways to leverage his various toolkits to support the creative vitality of Winston-Salem.

Sarah Kaplan, 31, Director of Connectivity at Creative Center, is blending her well-rounded skills in nonprofit management, fundraising, event planning and social media to bring focus to the Center’s marketing plans that leverage social media strategies to connect with creatives and to help Winston-Salem connect personally with leaders through the community’s lens to target talent.

And Kaplan knows a lot about talent, as she is a successful entrepreneur and owner of VUE by SEK, a growing provider of creatively-designed jewelry that is. She credits much of her inspiration from her days working in development at the National Gallery in Washington, DC.

In fact, Kaplan was recently highlighted by Forbes in their feature, “Modified Jewelry Aims To Be The Hallmark of The Future,” published October 26, 2020, which credits the global pandemic with giving power to this rapidly growing trend in jewelry.

“In creating jewelry that feels personal, delicate and feminine, today, jewelry brands require connection to the shapes and textures of the natural world. Silhouettes experiment with the ideas of balance, proportion and movement with attention to both the positive and negative space the pieces embody. More to the point, consumers are craving quality creation and longevity; such as a necklace that is hypoallergenic, stronger than gold, 100% recyclable, and will never tarnish. The fresh product offerings today have a laser focus on what is customer-centric

Of Kaplan’s jewelry, it says, “Every VUE by SEK piece is small-batched, handcrafted, and made ethically and locally here in the United States.”

In August, she also was featured in Woman Around Town, an online publication that covers timely topics in New York and Washington, DC.

Trey Newstedt, 29, a member of Creative Center’s National Advisory Board, based in Atlanta, received the coveted “Rising Star Award,” given annually by the Public Relations Society of America’s Georgia Chapter “for professional excellence and significant contributions” to the chapter.

Newstedt has been in PR for nearly seven years and has held roles in both agency and corporate after graduating from Elon University. Currently, he is the Enterprise PR Manager for IHG (InterContinental Hotels Group). In this role, he is responsible for highlighting the industry-leading work happening across marketing, commercial and technology at IHG including guest experience and hotel innovations, B2B offerings and more.

Since joining IHG in August of 2017 as Communications Specialist, he has worked across Holiday Inn, IHG Rewards Club and its upscale brands. He also completed a two-month secondment in the summer of 2019, supporting the Greater China team in Shanghai. Prior to joining IHG, he worked at Edelman and Rountree Group Integrated Communications.

Newstedt is motivated to give back to the next generation of comms professionals and has assumed several PRSA leadership roles over the past five years. He helped launch and expand the Chapter’s mentoring program, has served as an Annual Conference roundtable speaker, and co-chaired the Young Professionals Special Interest Group. He also serves as president for the Elon University Alumni Atlanta chapter.

Winston-Salem celebrates the ratification and certification of the 19th Amendment

On a sweltering afternoon at Winston-Salem’s Union Station, a small crowd gathered to commemorate another late summer day 100 years prior: the certification of the 19th amendment, granting American women the right to vote. In a formal proclamation, Mayor Allen Joines decreed August 26, 2020 “19th Amendment Celebration Day in Winston-Salem;” the highest-ranking member of the city council, D.D. Adams also addressed the audience. The occasion marked the community’s long tradition of observing national milestones, having held the first official Independence Day celebration in 1783, but this day was considerably more than an exercise in municipal pomp and verbiage, as its location — a public transportation terminal straddling the city’s eastern and western sectors — suggested. Doubling as a voter registration drive, the event highlighted the importance of women to vote, just as its organizer, Janie Wilson had hoped . . . but not originally intended. For prior to the Covid pandemic, which had forced everyone outside in the withering heat, Wilson had assumed she would be spending that day in August of  2020 in New York City.

As founder of the Women’s Fund, housed within the Winston-Salem Foundation, and alumna of Salem Academy, the oldest school for girls in the country, Wilson has long advocated to improve the lives of women and girls. It was no surprise, therefore, that in 2016, a 3-year-old  initiative covered in The New York Times caught her eye. “It was a Girl Scout project  being planned in NYC,” Wilson says, recalling fond memories of her own days in Scouting. “So I got in touch with them.” October of that year, she sent the group a donation. Two years later, she was in Gotham at a charrette for the project spearheaded by the nonprofit, Monumental Women. Its goal? To erect in New York’s Central Park a statue honoring the three activists who led the fight for American women’s legal right to vote: Susan B. Anthony, a Quaker schoolteacher, public speaker and brilliant strategist; Sojourner Truth, a former slave, itinerant preacher and abolitionist, and the well-heeled Elizabeth Cady Stanton, a gifted writer and mother of seven.

Taking up the rallying cry of earlier generations, most notably Abigail Adams who entreated her husband, and future president John Adams to “remember the ladies” while he and fellow delegates to the Continental Congress deliberated the colonies’ independence from Britain, the 19th-century suffragists embarked on a years-long crusade. As chronicled in Ken Burns’ 1999 PBS documentary Not for Ourselves Alone the arc of their journey, fraught with legal challenges, public commentary, arrest and the watershed Seneca Falls Convention of 1848, entwined the issues of suffrage, abolition and temperance. Yet for all their accomplishments, the three women would not live to see the passage of the 19th amendment. Nor would they be immortalized in the city that, at various points, they called home. In fact, among the 29 statues in Central Park, only a handful represented women as fictional or allegorical figures: Mother Goose, Alice in Wonderland, Romeo’s Juliet, nymphs, angels and the like. Where were the likenesses of “real” women? Women of historic significance?

Seven years, myriad meetings, and various civic and legal hurdles later, not to mention the bureaucratic brew consisting of the Borough of Manhattan, the New York Parks Department, the Central Parks Conservancy, the Public Design Commission, to name a few, Monumental Women provided New York with an answer. On August 26, 2020 the city broke the “bronze ceiling” with the unveiling of Women’s Rights Pioneers. The creation of sculptor Meredith Bergmann, it depicts Truth and Stanton seated at a table, the former speaking, the latter writing, while the stately Anthony stands above, organizing their efforts. As she explains in a video on Monumental Women’s web page (monumentalwomen.org), Bergmann included, among other details, the missing forefinger from Truth’s right hand (the result of a farming accident when she was enslaved); Stanton’s sunflower broach, a nod to her nom de plume, Sunflower; Anthony’s traveling bag crammed with documents. The unveiling ceremony was a celebratory occasion, with public figures either taking the podium or appearing remotely through an online video feed. The Girl Scouts were in attendance; there was much applause. But one participant was missing.

The pandemic may have kept Janie Wilson at home, but not out of action. Approaching Creative Center of North Carolina, she and the Women’s Fund called attention to the 19th Amendment’s importance to women, people of color and younger generations, and the need to commemorate it. So it was that the Union Station event came together, with no budget and with an added benefit of spreading Monumental Women’s mission encouraging communities across the country to honor local women in public settings. Groups from the city’s institutions also represented — Wake Forest University, Forsyth Tech, Winston-Salem State University, UNC School of the Arts, and fittingly, Wilson’s own alma mater, Salem Academy and College. (In fact, at the request of Salem’s interim president, Susan Henking, Wilson appealed to her former classmate Nashville singer/songwriter Marshall Chapman to record a music video for a national 19th Amendment event in Seneca Falls, New York.)

Given the stifling summer heat, Winston-Salem’s 19th Amendment Celebration Day was short-lived; the news cameras dispersed early so as to broadcast it to raise awareness, but voters registered for the impending fall election. An election that would see the integrity of some states’ ballots and election systems called into question, stressing as ever, the need to protect every citizen’s birthright. Despite the post-Election Day chaos, an unprecedented trend came to light among uncontested votes: According to Rutgers University’s Center for American Women in Politics, a record number of 144 women were elected to serve in the 117th Congress. Perhaps, in time, some of them, like Anthony, Stanton and Truth will be remembered in communities such as Winston-Salem. For as New York has shown, all that’s really needed to break the bronze ceiling is an iron will. 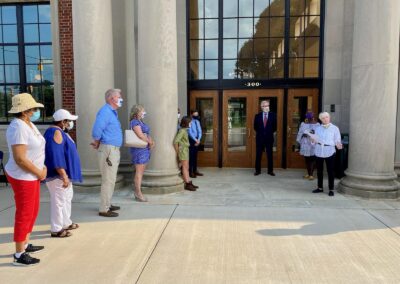 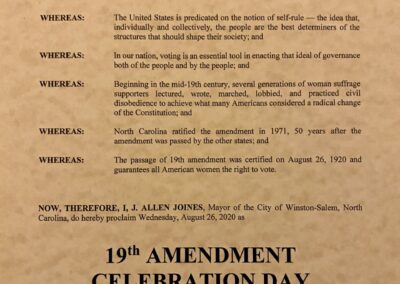